Of Dart Boards and Zoo Maps 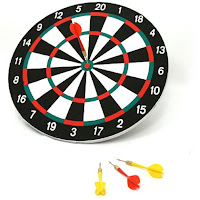 Getting gifts from our friends and family makes us happy, but there is greater pleasure in trying to find the right present to give others. When we were just little kids growing up in India, my relatives often visited countries in Europe and brought back small gifts for us. We received our share of remote controlled cars, watches, video games, T-shirts, roller skates, calculators, etc., but the one gift that fascinated all us three brothers and captured our imagination was a dart board that my Uncle Parthasarathy brought from England. We had never seen or heard of this game. We hung the dart board on the backside of a solid, wooden door at the main entrance and tried to shoot darts from an imaginary line behind the sofa. We spent endless hours in summer just devising new games and throwing darts. Soon the door had thousands of small holes made from the darts that had missed the board completely.

One night, when Uncle Parthasarathy visited us at Ashok Nagar, he asked us if we had figured out how to play the game of darts. We showed him the back side of the main door with all those holes and he was quite taken aback to see a really nice, solid wooden door disfigured so badly by our practice sessions. He confessed that he had never imagined that we would like this game so much.

Recently on a business trip to Venice, I was fascinated by a puppet of Pinocchio and spent a few minutes manipulating his arms and legs. The shopkeeper quoted 20 Euros for it, and I bargained it down to 15 and got it gift wrapped and brought it for my son Keshav who had just turned 5 then. But Keshav was disappointed with my selection and never touched the gift ever again!

A few days later, when he was trying to read the animals on a map of Taronga zoo (from Sydney), I scolded him for trying to read very small print in poor light. He promptly switched on the light and went back to reading his map! I was impressed by his complete concentration with the animals on the map. The next day at work, I printed large colorful maps of the Taronga and San Diego zoos on 11x17" paper and brought it for him. He was ecstatic when he received his gift, which had cost me absolutely nothing. He promptly handed me scotch tape and scissors and had me paste all those maps on his bedroom walls. When I saw his interest, I was reminded of the movie Animals are Beautiful People, which I had watched at the Udayam theatre in Chennai as a small kid . I played a small clipping of the movie in You Tube, and he got hooked to it. So I rented the movie from Netflix, and both of us loved watching it. Several trips to local zoos followed to satisfy his desire to see as many animals as he possibly could.

Then an idea struck him. He dug out his old train and tracks and some animal toys from his closet and took it to the basement. There he arranged the tracks to form a large circle and put all the wild animals inside it. For $2, he offered to take us on a train ride to show us the African section of his zoo! And in the evenings, when the visitors to his zoo go back home, he shoots his documentary (like in Beautiful People), with detailed running commentary about the cheetah chasing a warthog!

It is amazing how really simple things make us happy, and this is evident very early in our lives. And yet, as we grow older we tend to forget this tenet and seem to focus on things that are big and more expensive. People spend a lot of money buying a Lexus; live in that million dollar home only to pay a huge mortgage; wear a Rolex watch just so they can show others; and take that expensive vacation to the exotic island in the Pacific, but never realize that all they need to find is perhaps a game of dart or a trip to the zoo to make them really happy!